On this Super Saturday, the counselors defeated the campers in a close match in the staff vs. campers soccer game. 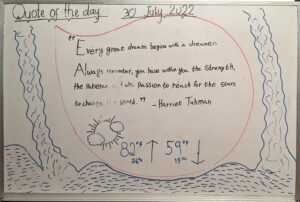 The counselors took a quick two-goal lead, but the campers battled back to make it only a one-goal deficit before halftime. In the second half, after the counselors again opened up a two-goal cushion, the campers made a frenzied comeback to get within one at 3-2, with not much time left. Even given a spirited last-minute comeback spree, the campers couldn’t quite find the back of the net to equalize things, with counselor Lili making a dramatic last-second save to preserve the win for the counselors. The campers already have the whiteboard out, writing down plays and tactics for next year’s game. There was tremendous effort and athleticism from both sides. Sportsmanship was good. Despite the campers’ disappointment, the Kupugani girls camp had a very pleasant day, ending with a campfire, a night hike, a movie, and a night under the stars. Looking forward to another great day tomorrow!

“My kids won’t stop talking about all the cool things they did, the friends they made, and how badly they want to return next year to Camp Kupugani.”

“Our kids have been growing, learning, and enjoying themselves at Camp Kupugani since 2007. The dedicated and diverse leadership and staff provide a safe, encouraging, well-rounded, and valuable experience for campers. Campers learn from and with each other how to value differences, create meaningful connections and thrive.”

“This camp is amazing and exceeded my expectations. I went for a Mother / Daughter Weekend to reconnect with my daughter and we did that for sure. Thank you Camp Kupugani! My daughter loved it so much we immediately signed up for the 2-week girls-only session for the following summer.”

“I love camp because it is a safe place to be myself without being criticized for it.”