Takeaways from Stamped from the Beginning

Kevin Gordon, Director of Camp Kupugani in Leaf River, IL–located two hours west of Chicago–recently read Ibram X. Kendi’s Stamped from the Beginning (Nation Books, 2016). Essential reading for anyone who wants to understand racism in the United States. In shedding much-needed light on the murky history of racist ideas, this book offers tools we need to expose them—and in the process, gives us reason to hope. Check out the book here. See below for some excerpts. 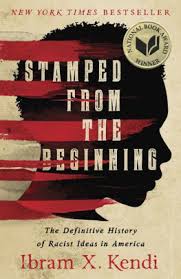 Who benefits from anti-racism?

Here’s a brief selected timeline of the economic impact of racist ideas:

There has been legal / political implementation of racist ideas, when focusing on “Intent” vs. Impact

There has been legal / political implementation of racist ideas, when focusing on race “neutrality”

There has been legal / political implementation of racist ideas, when implementing “Law and Order” non-neutrality

“Uplift Suasion” has shaped the racist belief system of many.

For a progressive future, we need to be mindful that:

How To Teach Kids About Diversity And Acceptance

Some insights from Caste: The Origins of Our Discontents

Donate now to empower and support deserving kids!
You can also support by shopping with Amazon Smile!

“My kids won’t stop talking about all the cool things they did, the friends they made, and how badly they want to return next year to Camp Kupugani.”

“Our kids have been growing, learning, and enjoying themselves at Camp Kupugani since 2007. The dedicated and diverse leadership and staff provide a safe, encouraging, well-rounded, and valuable experience for campers. Campers learn from and with each other how to value differences, create meaningful connections and thrive.”

“This camp is amazing and exceeded my expectations. I went for a Mother / Daughter Weekend to reconnect with my daughter and we did that for sure. Thank you Camp Kupugani! My daughter loved it so much we immediately signed up for the 2-week girls-only session for the following summer.”

“I love camp because it is a safe place to be myself without being criticized for it.”

Donate now to empower and support deserving kids! You can also support by shopping with Amazon Smile!

First-time campers can receive a discount when they register for girls or blended sessions!